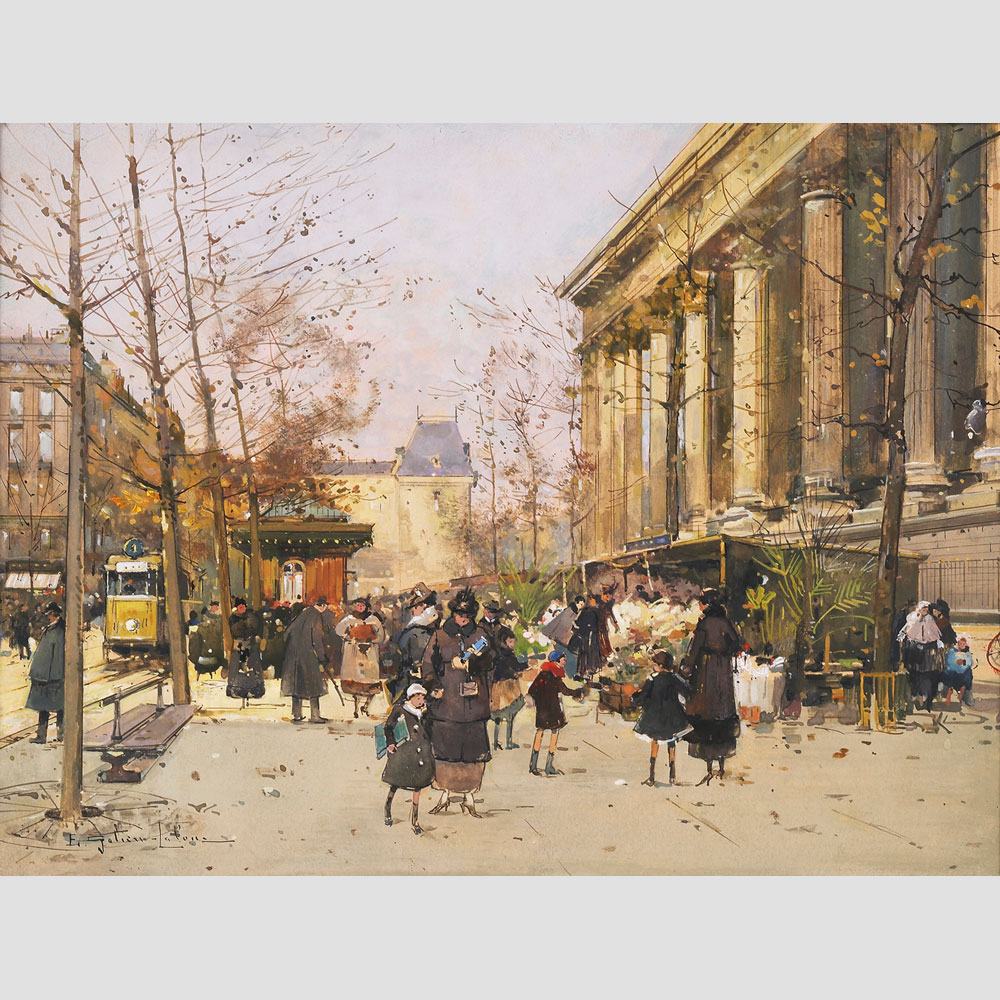 Galien Laloue, one of the acknowledged best painters of Paris, was born and lived most of his life in Montmartre. Born in 1854 to Charles Laloue, a set designer working for a Parisian theatre, he was the oldest of nine children.
Watching his father’s work, Galien became interested in art when he was very young and, except for a brief period spent in the army, he never went anywhere without his brushes and paints. Life without painting was not worth living as far as he was concerned. He lived for his art only and after breaking his arm in 1940 while being evacuated to Bordeaux, and not being able to paint any more, he died a few months later at the age of 87.
Laloue was lucky to live in Paris at a very exciting time for the city. Paris was being rebuilt and modernised and changed beyond recognition during his lifetime. His paintings are an accurate record of those fascinating changes.
1854, the year of Laloue’s birth, was also the year of the most monumental and drastic changes in the layout of the city of Paris. Baron Haussman, appointed prefect of the Seine a year earlier, started his vast project which included pulling down the old houses and building wide boulevards without which we could not imagine Paris anymore.
In 1870 Laloue’s father died. The 16 year old boy had to leave school and get a job. His mother found him work at a notary’s office but he did not like it. A year later he enlisted in the army to take part in the Prussian war. When he returned, he knew that all he wanted to do was to paint. In 1874 Laloue was employed by the French Railway lines. The company was expanding its network from Paris to most parts of France and needed an illustrator to travel and paint the new section of the rail network. This gave Laloue an opportunity to travel to the provinces. Every day, once his rail paintings were finished, he started his own work – country scenes and landscapes.
His favourite subjects, however, were always scenes of life in Paris. He used to sketch out in the streets and the architectural details were always accurate, and in fact more important than the human component. He would usually finish his paintings in the studio and recreate the atmosphere captured in the sketch but sometimes incorporating his family and friends into the pictures.
His talent was appreciated by his contemporaries (unlike the Impressionists who were only recognised towards the ends of their lives or even after their deaths). Laloue was popular and his paintings sold very well. He was loved not only by the French, but also by the American and British collectors. Paris at the beginning of the 20th century was the centre of the universe for Laloue – the most beautiful place on Earth. Those who agreed with him, those who visited Paris and fell in love with its atmosphere, enjoyed possessing his paintings so that they could be transported back in their imaginations to the wonderful time they had spent. His nostalgic, meticulous paintings appeal even nowadays, as most of the background details still exist and can be recognised while walking around the streets, boulevards and the quays of the city. Paris is to this day just as hectic and just as beautiful, and life life goes on as before – only the fashions have changed.
Obsessive about his painting – his only interest – in his private life he craved simplicity: he outlived three wives, all sisters, who had been his neighbours next door! Nor did he seek fame or academic recognition – he sold his work only to make a living, always asking for payment in advance so as not to complicate matters, and he had contracts with several art dealers to ensure a secure income for himself. However, he never overpriced his work, always charging the same amount of about one thousand euro in today’s money.
Laloue had four children, two of whom died at an early age. His daughter, Flore, from his second marriage was a pianist. He was an unsociable and difficult man and only trusted her – and indeed she was the only member of his family who seemed able to tolerate his obsessions. Eventually she ran his whole life for him, buying all his supplies and organising his professional arrangements. After being widowed for the third time, he went to live with Flore at her Paris home. There he worked unceasingly, only stopping to eat and always on his own. He dies 8 years later at Flore’s country house in Chérence.
Eugène Galien Laloue worked under many pseudoynyms, possibly for contractual reasons. The three most frequent names in which he signed, in addition to his own, were “J Lievin”, “E Galiany” and “L Dupuy”.