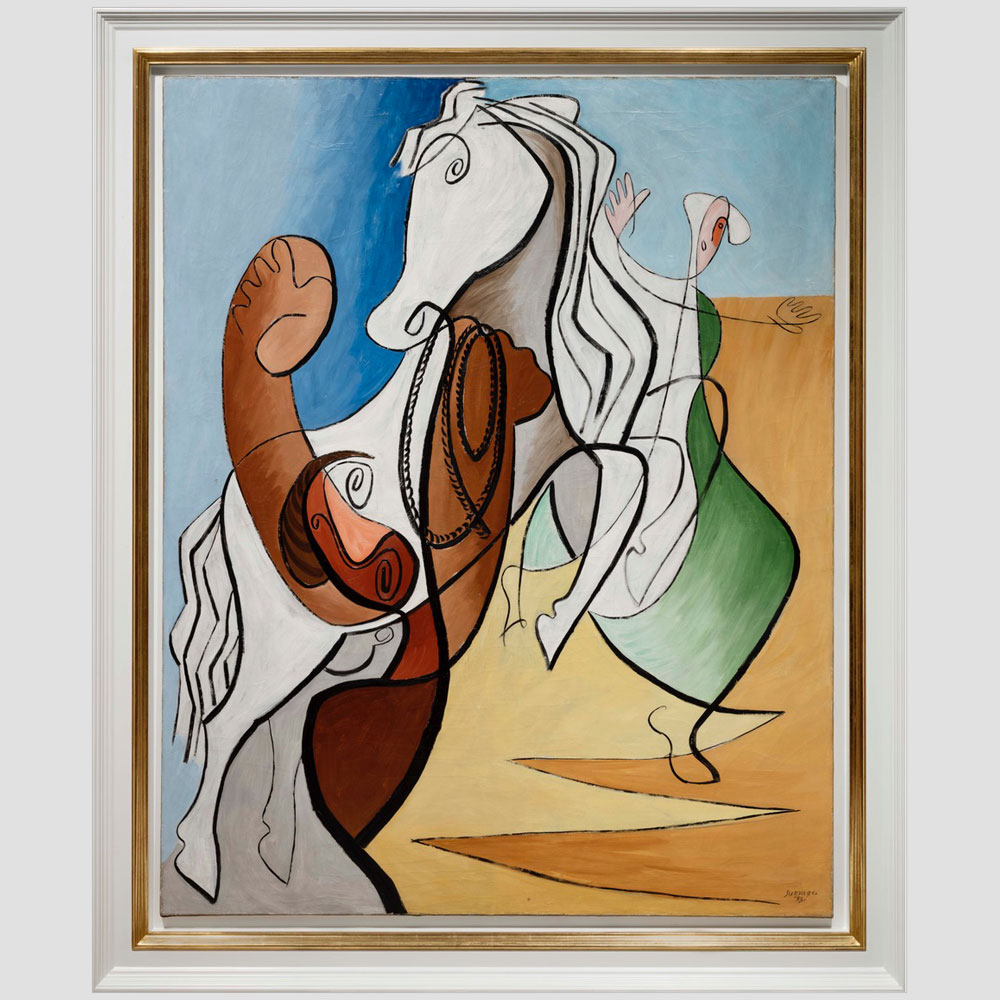 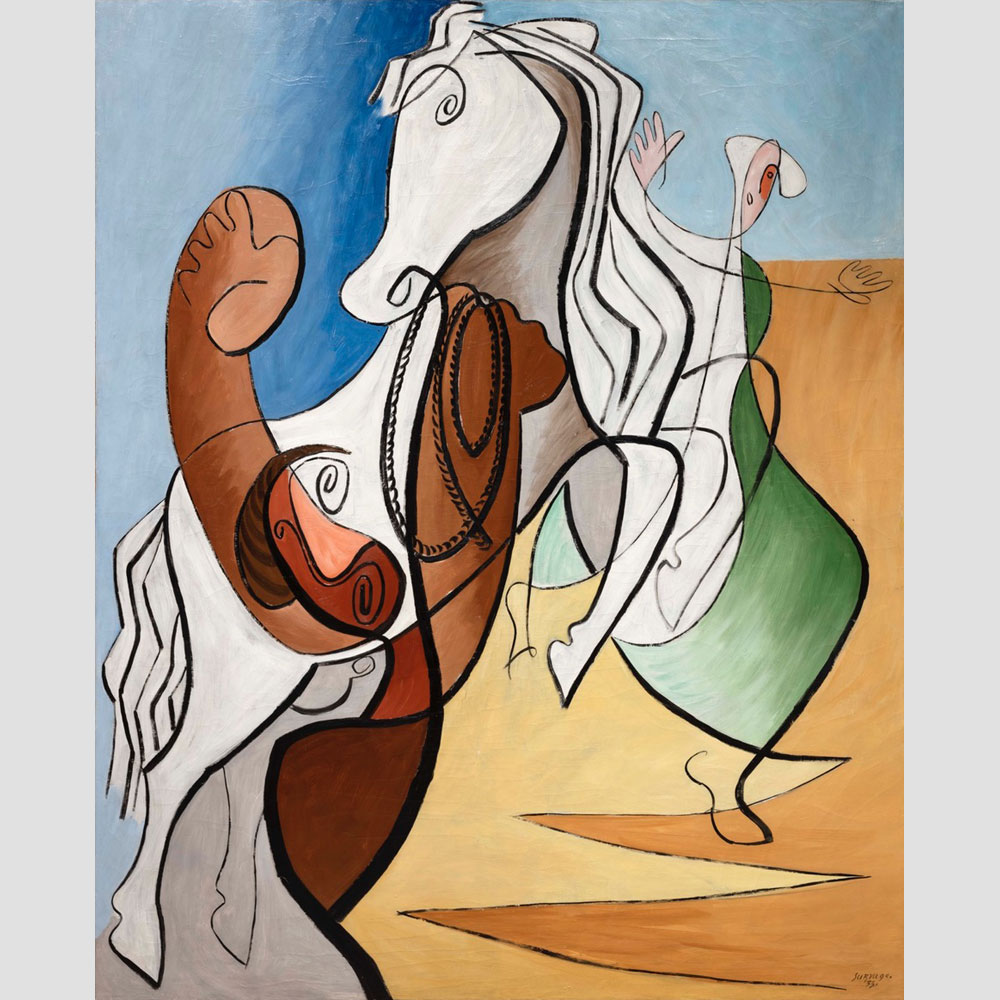 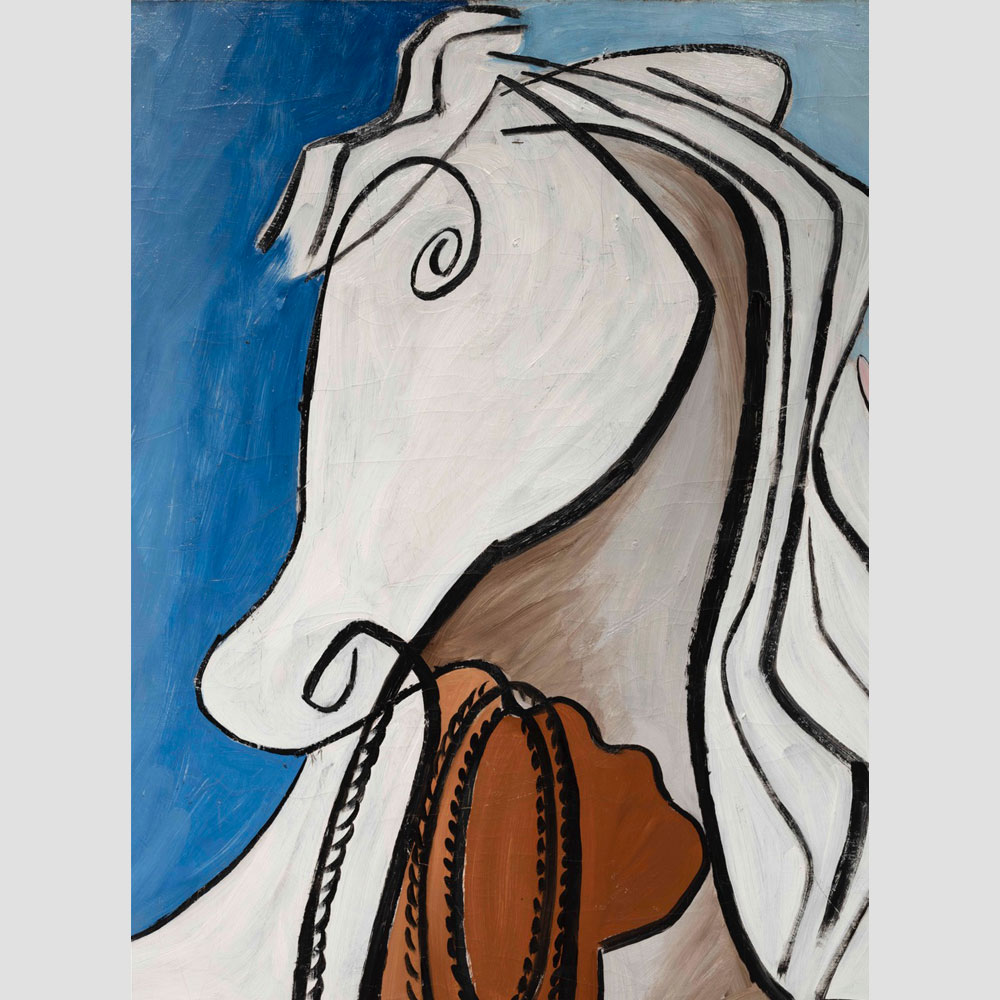 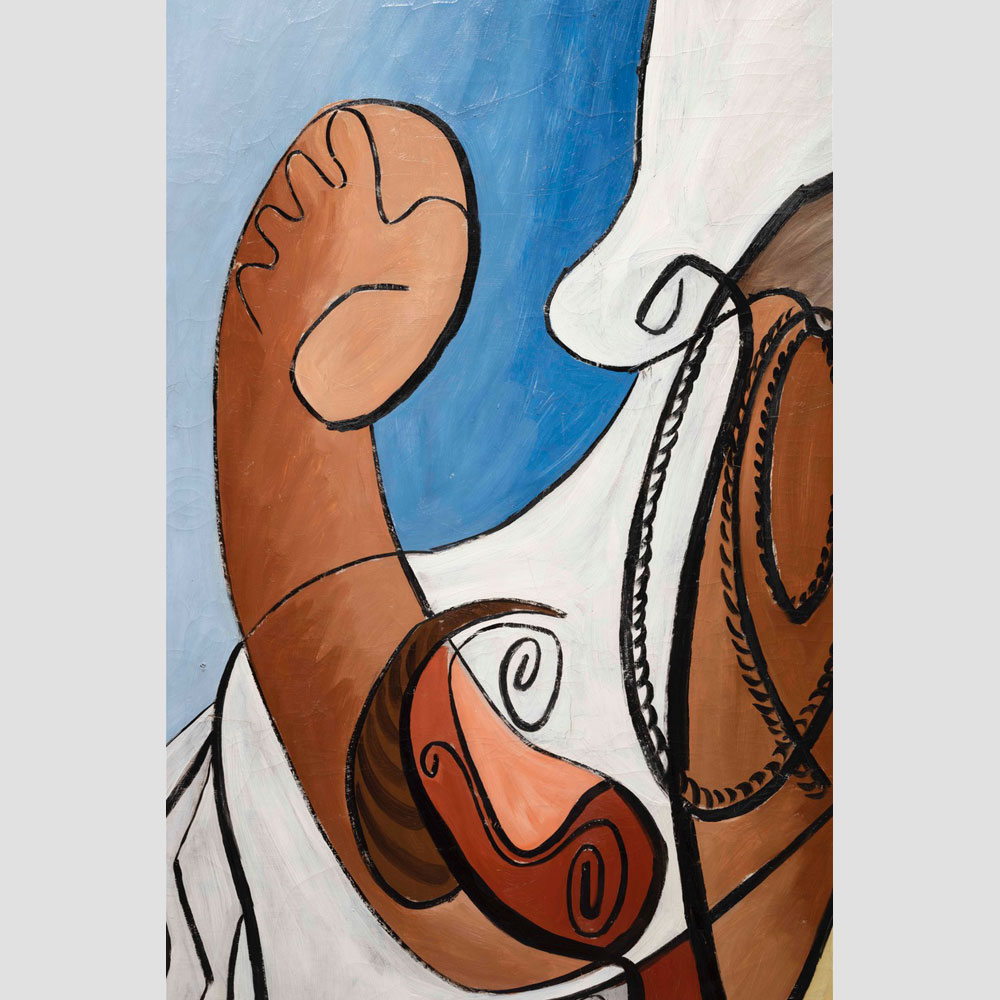 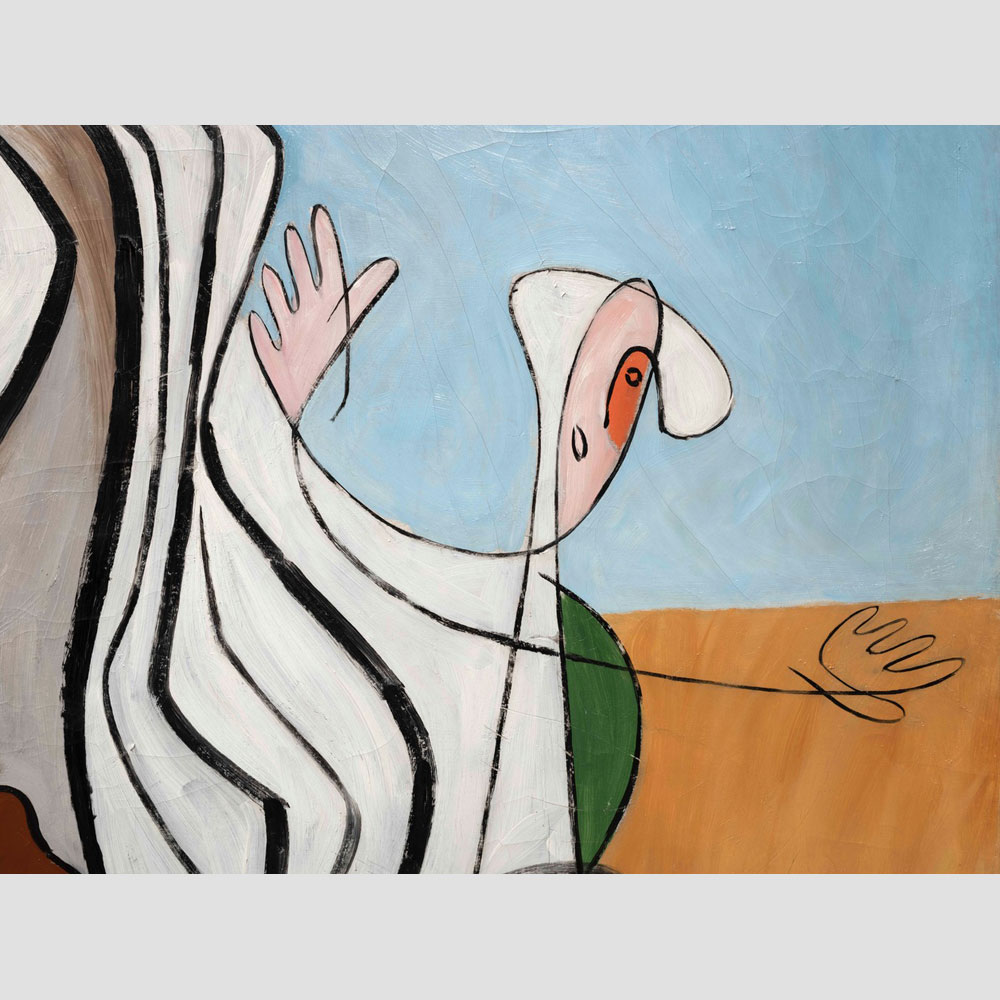 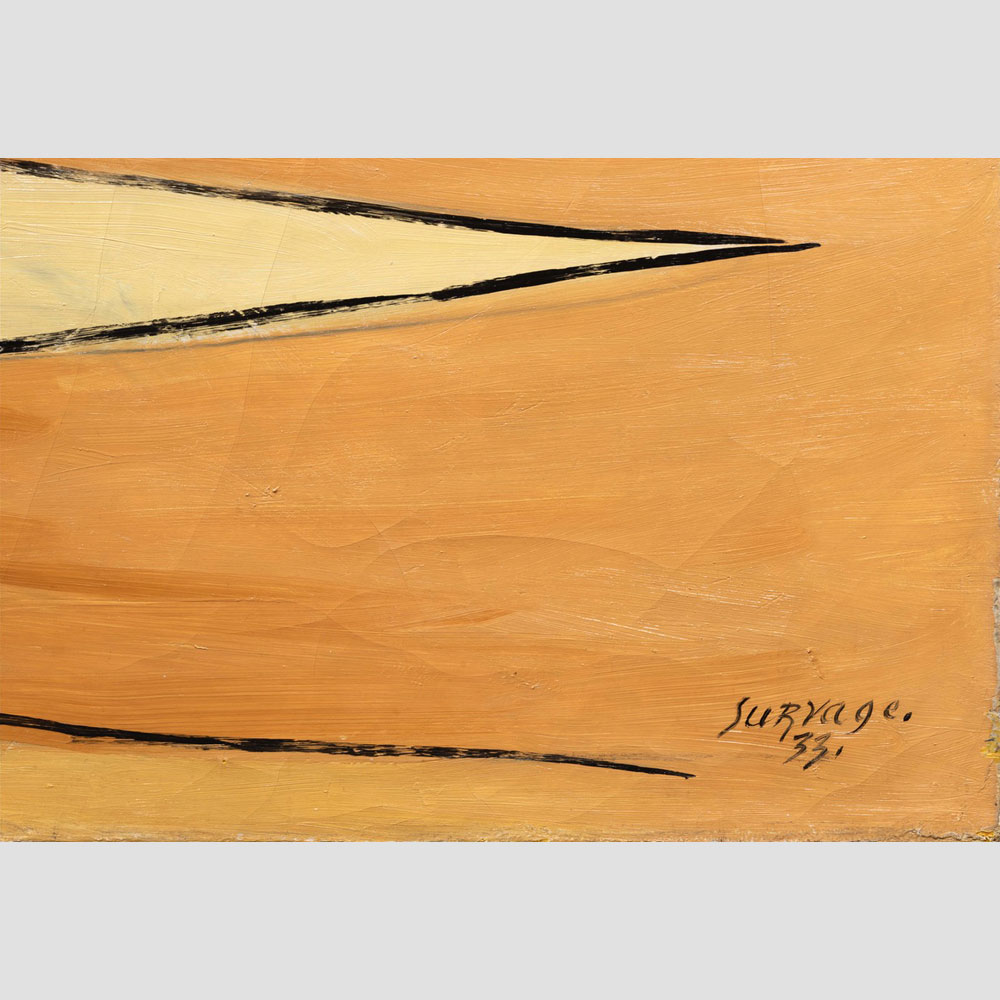 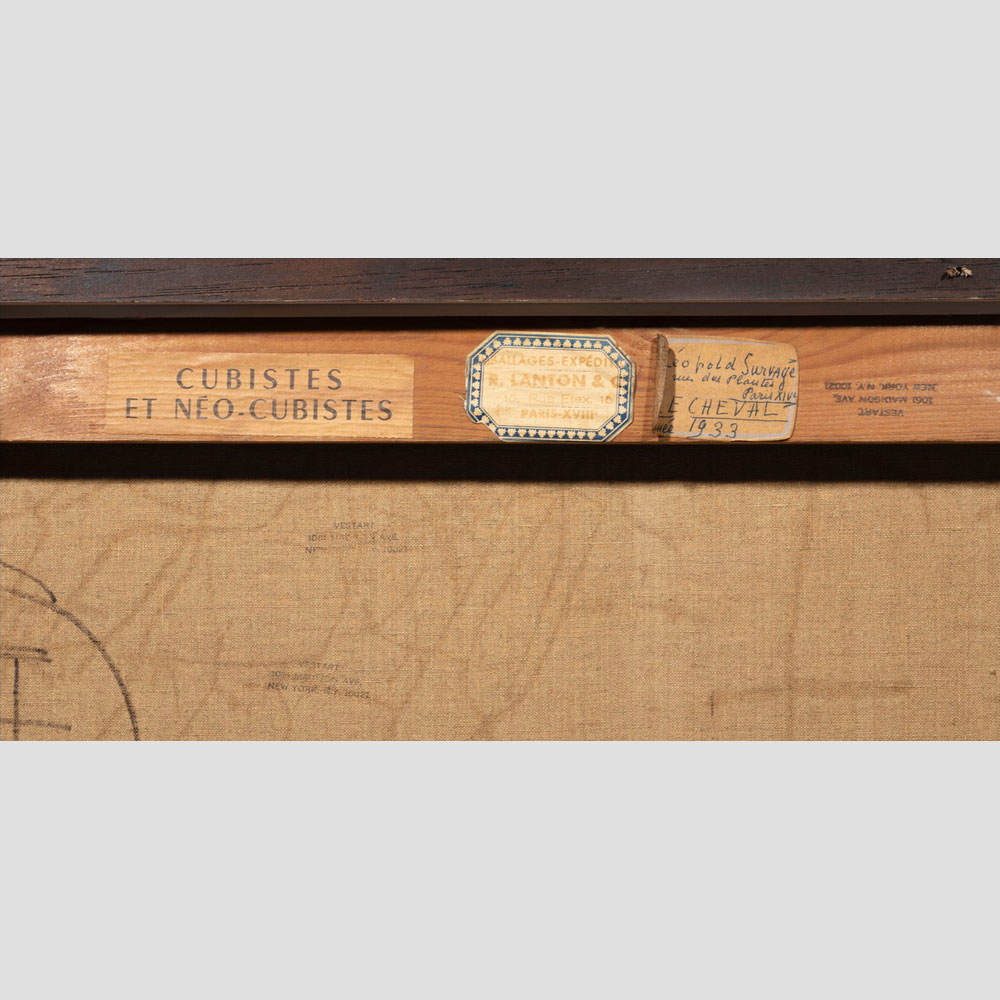 Having risen to the status of a Modern Master as a member of the Cubist group at the beginning of the century, Survage was acclaimed by Apollinaire and Léonce Rosenberg for his idiosyncratic style. Born in Moscow in 1879, as a child he dreamt about becoming an architect but seeing the works of Gauguin and Cézanne in the Morosov collection made him decide to pursue painting and he enrolled at the Moscow College where he met Archipenko, Larionov, Pevsner and Sudeikin. They joined together and exhibited as the Symbolist Group The Blue Rose  in 1905. By 1908 Survage was in Paris where he attended Matisse’s course for a short while and exhibited at the Salon d’Automne. After an early Fauvist phase he joined the Cubists while the movement was just developing, he took an active part in their experiments and exhibited with them at the Salon des Indépendants in 1911. In 1910 and 1911 Survage exhibited with the historic Knave of Diamonds society in Moscow that included Kandinsky, Chagall and Malevich, and was one of the most influential organisations for promoting contemporary art and as such considered to be a crucial reference point in the extraordinary adventure of Russian Modernism. In 1912 Survage started on a groundbreaking series “Rythmes Colorés” for which he produced two hundred totally abstract compositions, thus historically positioning himself as one of the early pioneers of Abstract art, many of these are now in the collection of the Museum of Modern Art in New York.

Survage’s contribution to the 1914 Salon des Indépendants was applauded by the famous poet and critic Guillaume Apollinaire, who subsequently organised a one-man exhibition for him in 1917 at the Galerie Bougard. It was during these years that Survage embarked on one of his most famous and influential series, the Cubistic city scenes “Paysages Cubistes”. In 1919 Survage became highly active with the legendary Séction d’ Or group to which he had been a founding member and consisted of all the modern masters, Archipenko, Braque, Boccioni, Gris, Leger, Picasso, Van Doesburg etc. Together they held revolutionary exhibitions in Paris, Rotterdam, Amsterdam, Brussels, Rome. At this time Survage also began to exhibit at the famous Galerie L’Effort Moderne of Léonce Rosenberg who had taken over from Kahnweiler as the leading Cubist dealer. Here during the 1920’s Survage exhibited in several major exhibitions such as “L’Effort Moderne”; “Les Maitres du Cubisme”; “Synthèse et Construction”. Furthermore Survage became involved with the activities of De Stijl and created a series of works for the Bauhaus.

Survage’s reputation would continue to be reinforced through numerous exhibitions over the next few decades of the artist’s prestigious career including Abstract Art, the First Masters, Paris, Rome, Milan, 1950. In 1937 he received the coveted gold medal for his outstanding work at the Paris International Exhibition. His immense contribution to the development of modern art has been recognised through several awards notably the Prix National Français de la Solomon Guggenheim Fondation, 1960; and the Légion d’Honneur, 1963; also many retrospectives including a major show in 1966 that started in Paris and went on tour to international museums.

In this year 1933, “The Horse” is an exceptional and monumental testimony to the change in orientation of Survage’s painting, from the shift from a constructive art to a dreamlike and surrealistic art. In Tossa in Catalonia, the painter had witnessed during a feria the dramatic charge of a bull through the crowd and then the capture of the angry beast. Through this memory, several paintings will repeat this striking scene for the painter: brutality of animal strength, panic fear of humans and desperate anguish at the unforeseen moment when life turns upside down. There is relevance in putting our painting in parallel with Picasso’s “Death of the Torero” (Picasso Museum, Paris) painted that same year 1933. Thanks to the cursive lines of the characters, the wavy design of the horse’s coat, the incantatory gesture of the man who tries to stop the animal, Survage substitutes for the brutal realism of the Spanish, a dream of his Slavic culture.