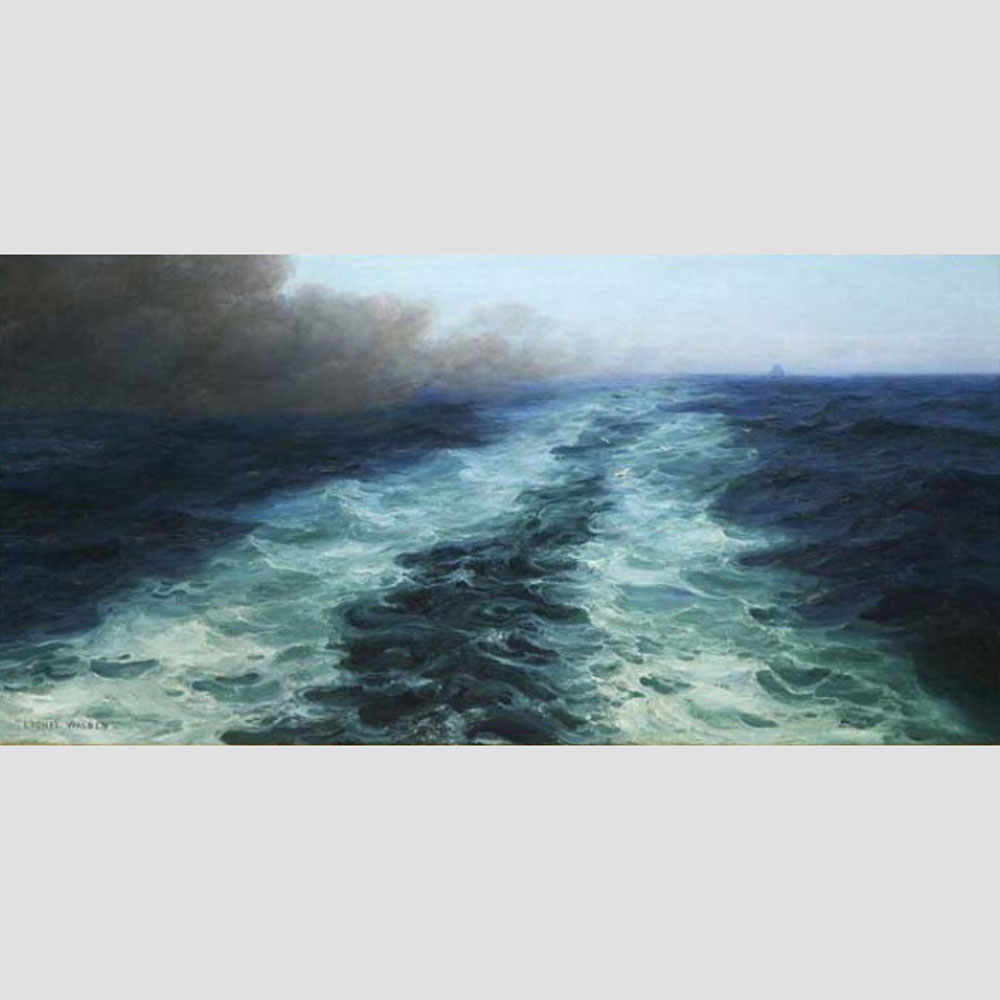 Lionel Walden (1861 -1933) is regarded among the painters of Hawaii as the “supreme interpreter of the seas,” Lionel Walden’s 1911 seascape, Kahala Coast, is a timeless reflection on land and ocean. In his landmark book Encounters With Paradise, David Forbes writes that Walden was the “finest seascape painter to work in Hawaii.” In 1917 a reporter for the Honolulu Advertiser, after having experienced the most comprehensive art show in the history of Hawaii, said about Walden, that he was “in a class by himself.” In 1928 another reporter wrote: “His is perhaps the only brush that has perfectly caught the aquamarine tints of Hawaiian waters and the waves crashing against black lava rocks.” Walden’s seascapes provide a primal satisfaction. His light-drenched Hawaiian shorelines evoke the strength and rhythm of the sea. Lionel Walden was described as a “stalwart and striking figure with an air of distinction.” “Statuesque.” He built a tiny hideaway studio in the wilderness of Kalihi Valley. Walden must have been a free spirit. In Paris, he was known as “the King of Bohemia.” In Hawaii, he created a exceptional reputation. His work was,and still is, in demand. Kimo Wilder, Hawaii’s bon vivant and a fellow artist, invited Walden to the islands in 1911. Although Honolulu stood in stark contrast to Paris at the turn of the century, Walden, nonetheless, found the light that inspired him in Hawaii. He painted brilliantly. Born in Norwich, Connecticut on May 22,1861, Walden had already distinguished himself in Europe before he arrived in Hawaii. Educated in Paris by E.A. Carolus-Duran, Walden had earned medals in 1899 and 1903 in the salons of Paris. In 1910 Walden was made a Knight of the French Legion of Honor. He exhibited to much acclaim at the St. Louis Exposition of 1900 and the Panama-Pacific International Exposition in San Francisco in 1915. His love affair with the Hawaiian Islands lasted almost two decades. In July 1933 Walden died in Chantilly, France from an accidental fall. His legacy includes Kahala Coast, a fully mature, classic seascape and Diamond Head one of the most enchanting early paintings of Hawaii’s famous landmark.