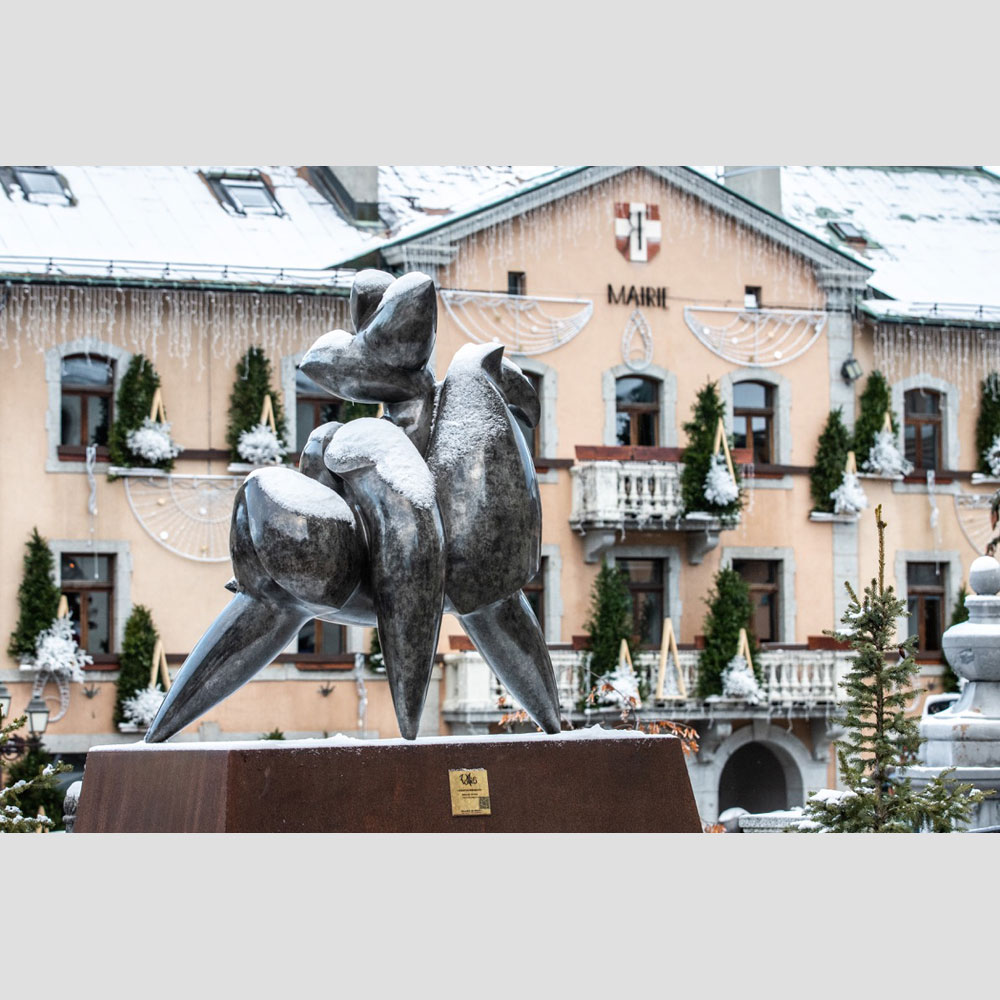 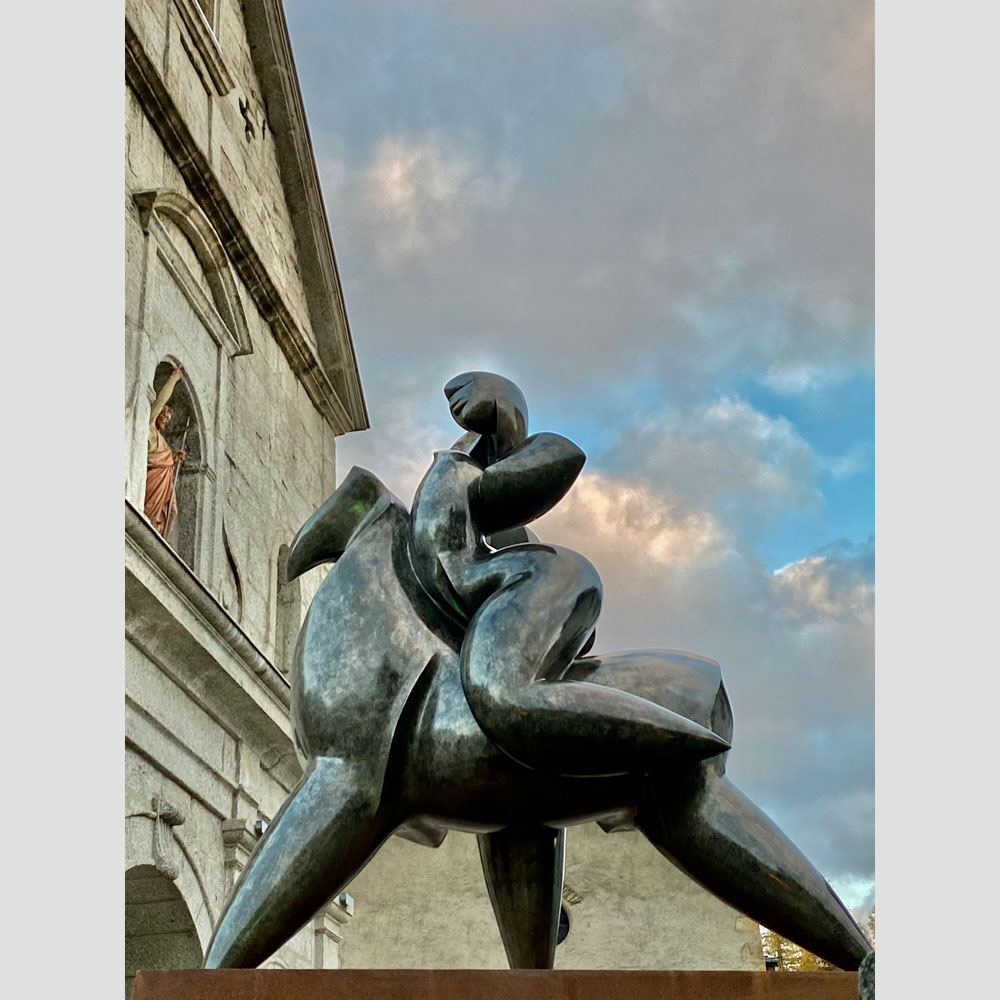 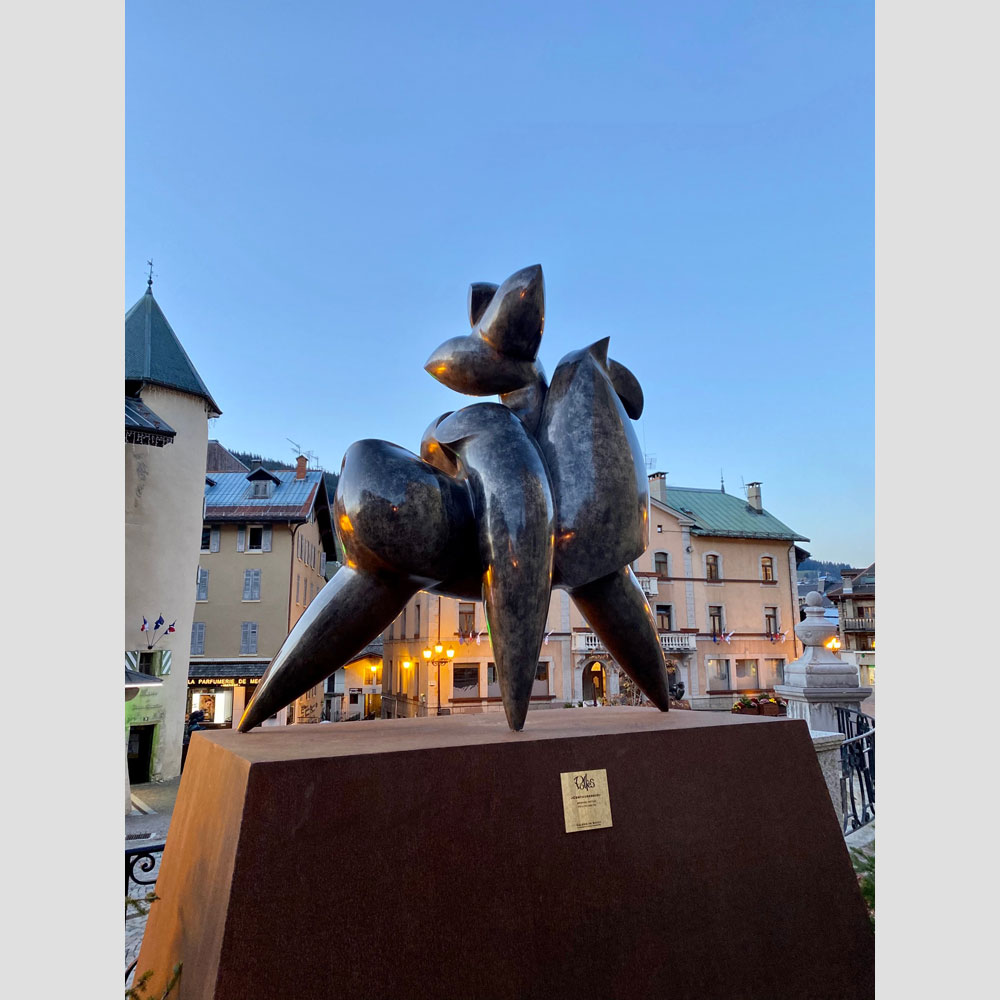 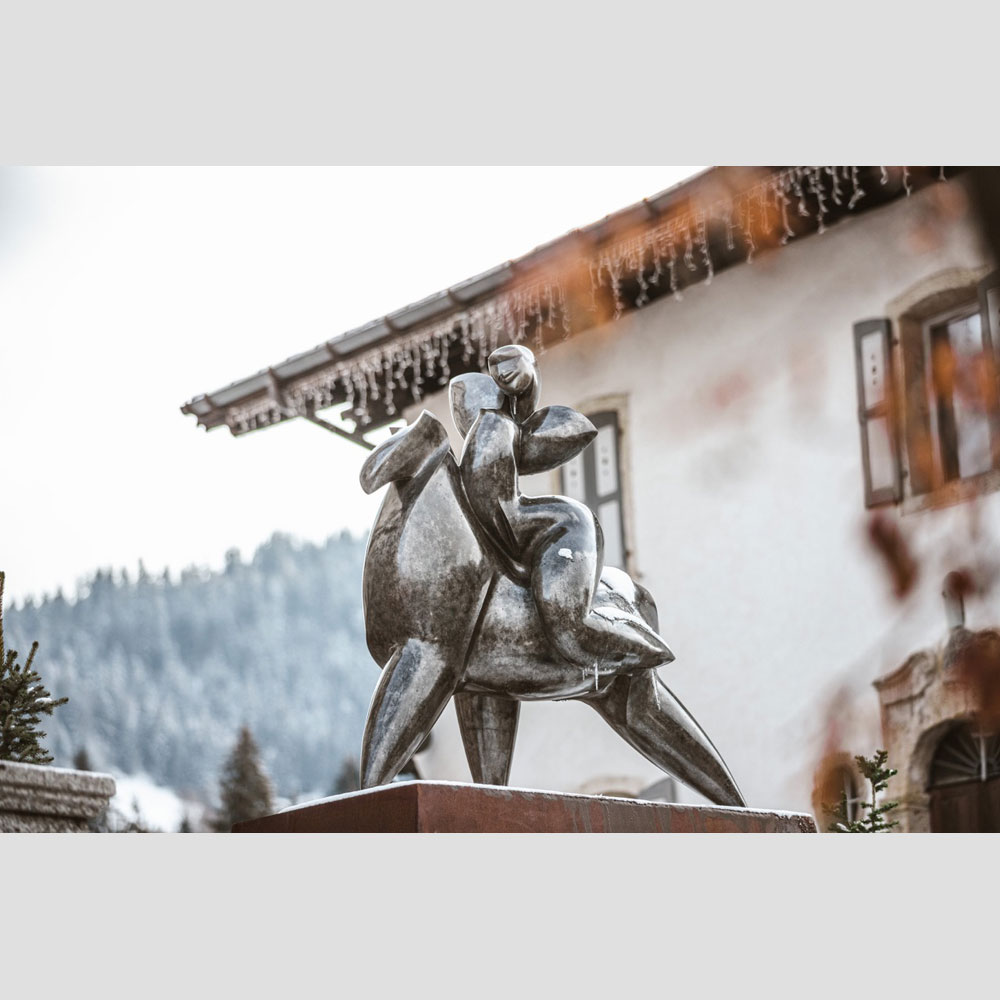 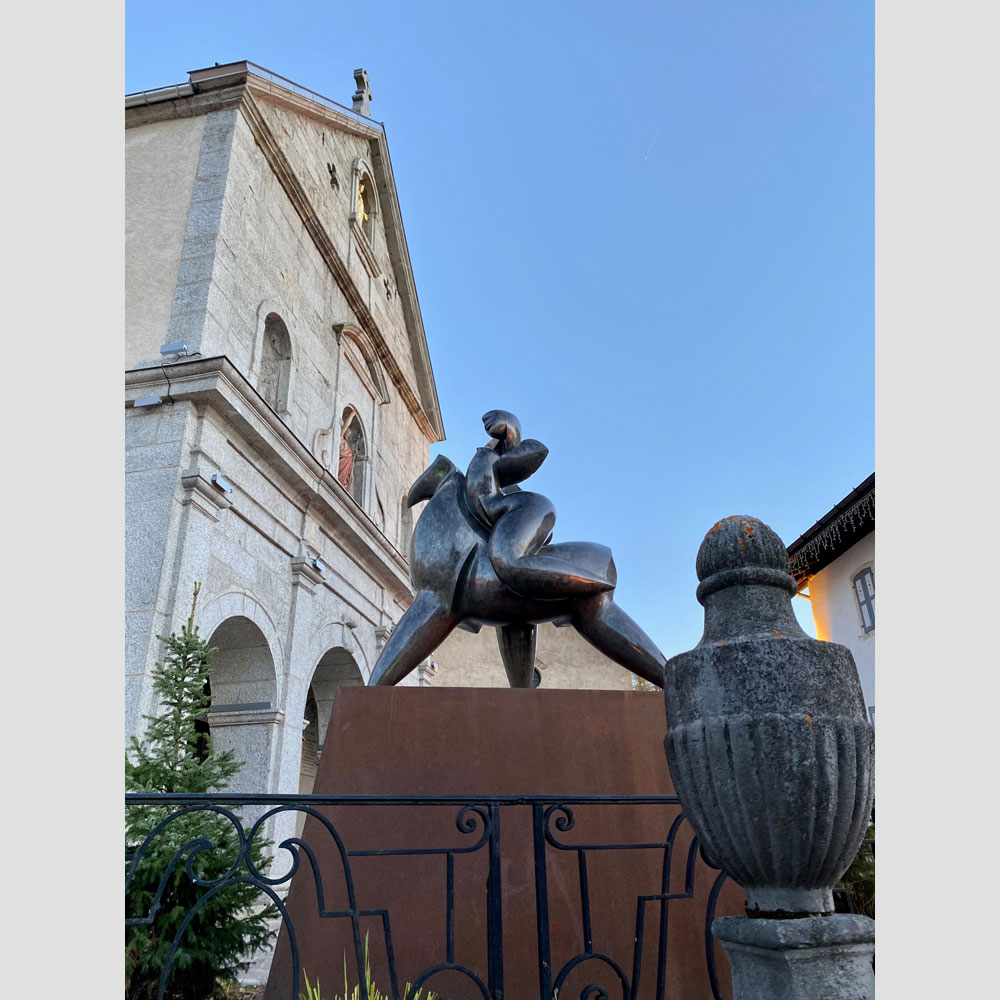 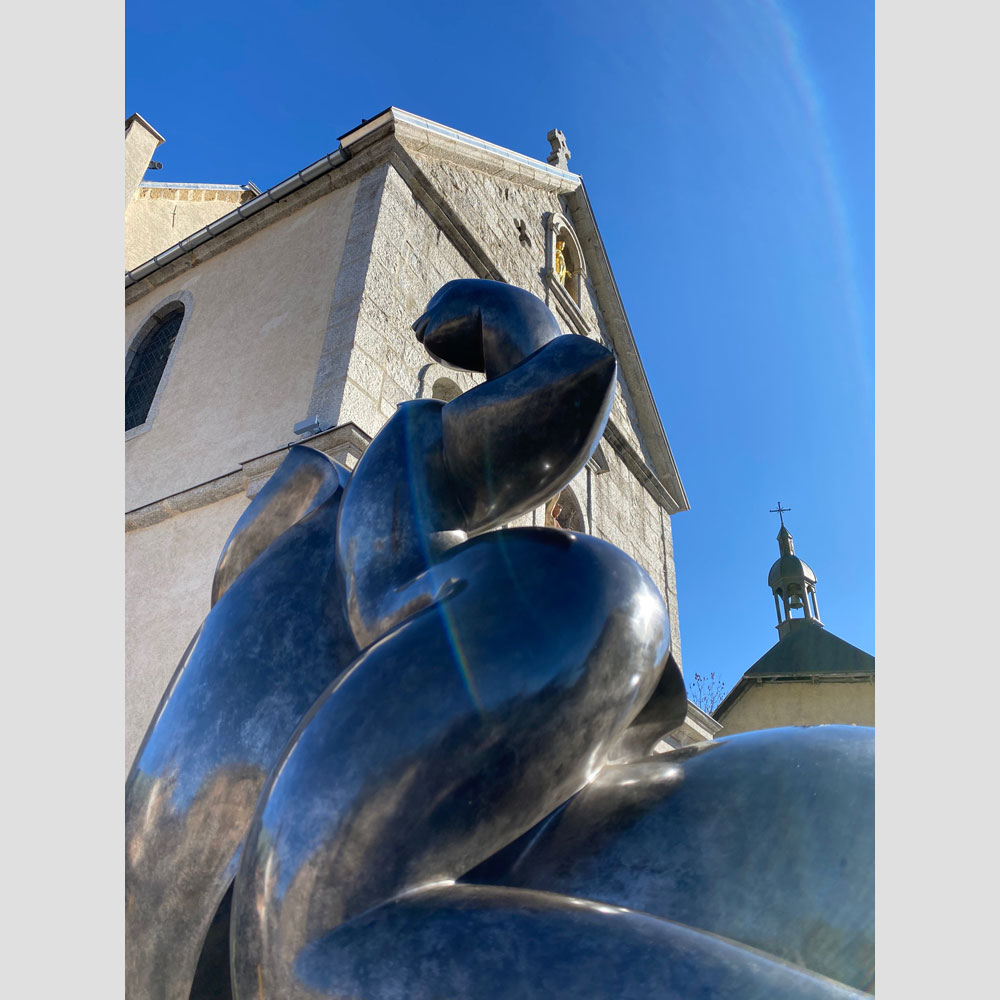 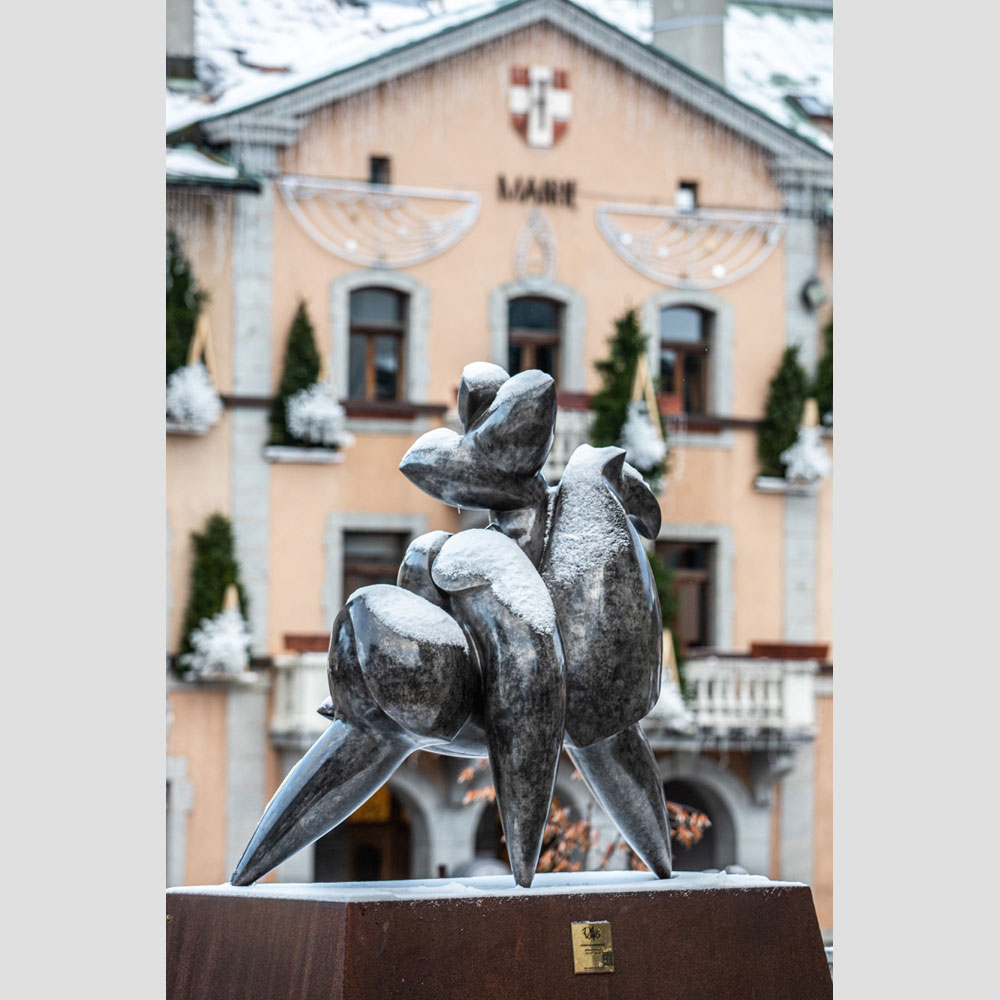 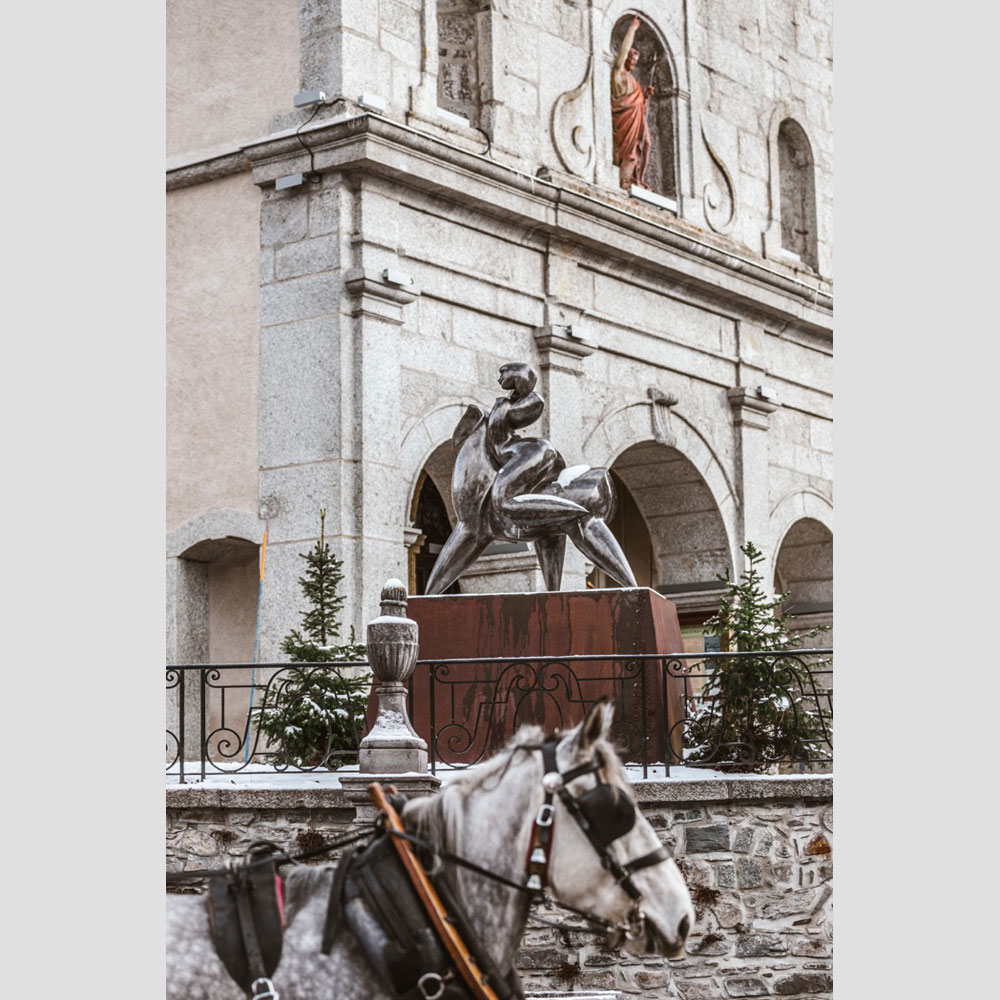 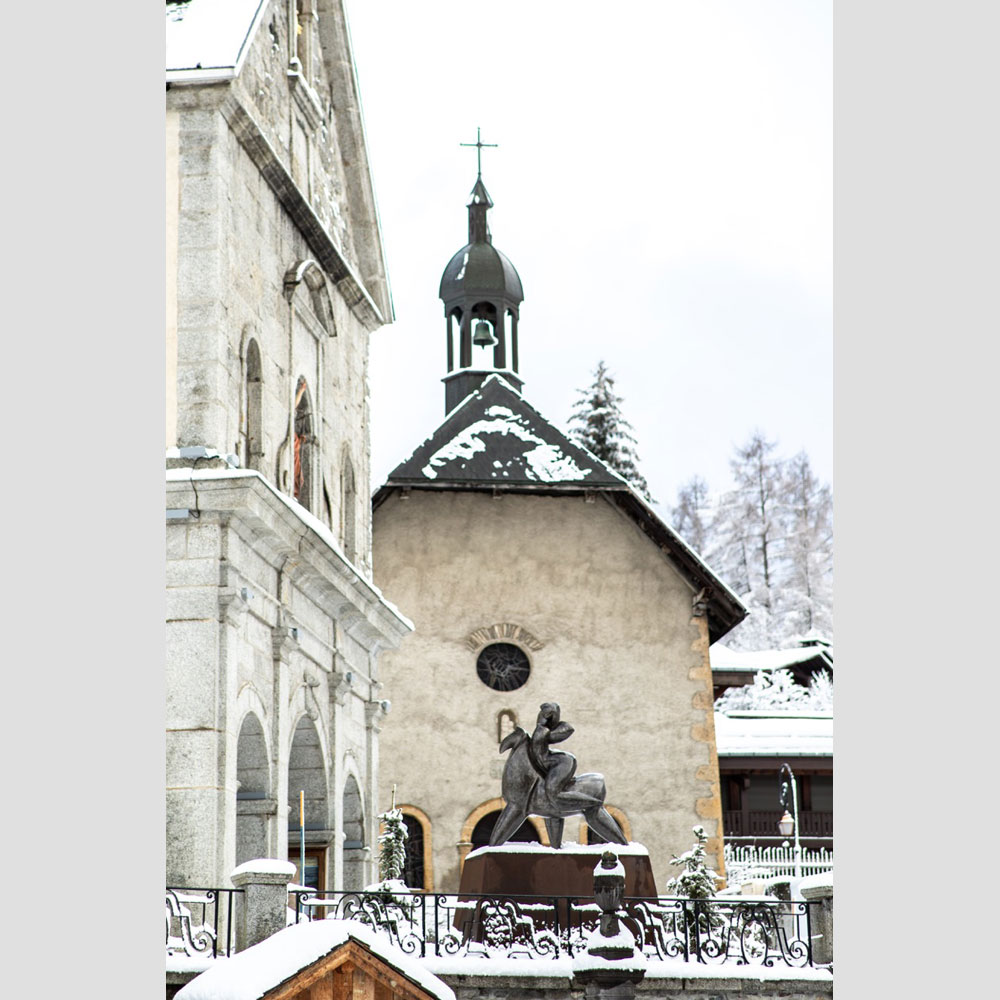 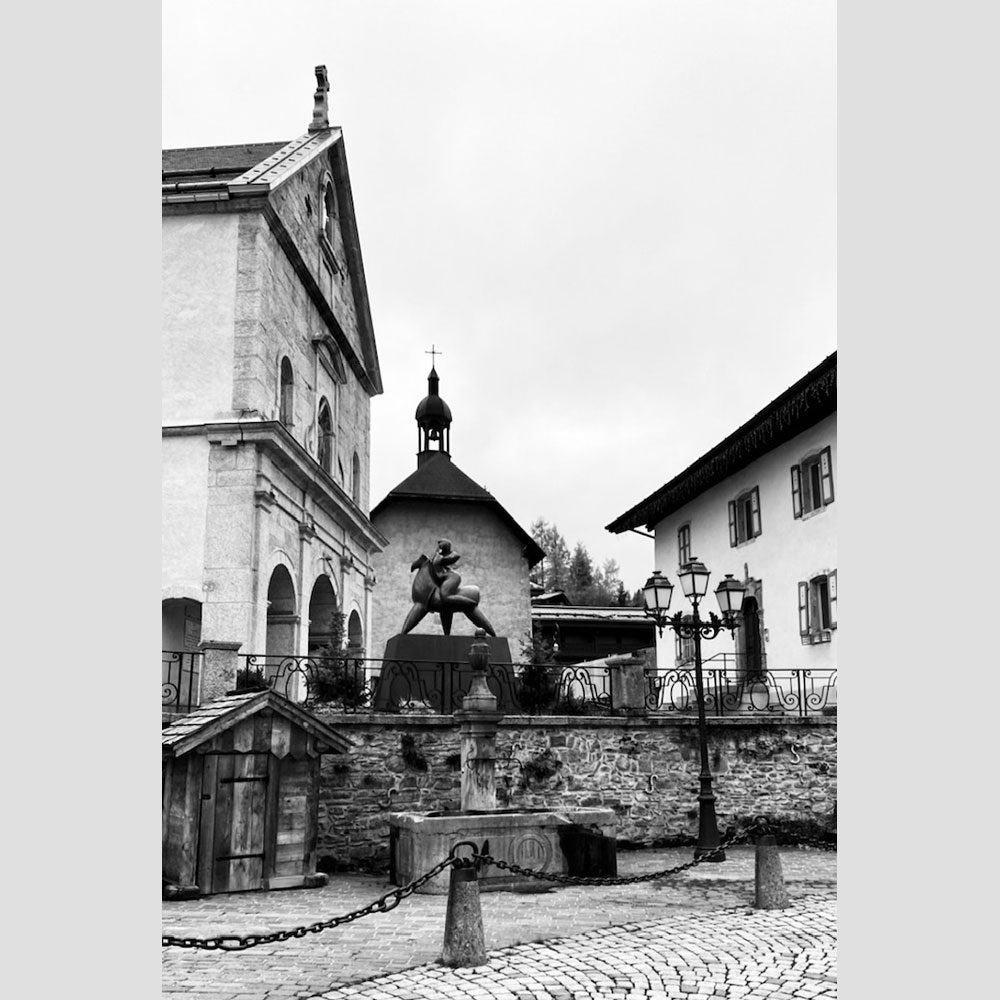 The sculptor Pollès takes over the Place de l’Eglise in Megève through five monumental works presented in collaboration with the Galerie de SOUZY. This open-air exhibition celebrates the talent of an authentic artist, perpetuating the tradition of the great masters of the 20th century.

Curves and counter-curves, volumes broken by sinuous ridges, like sculptural upstrokes and downstrokes – Pollès is the inventor of an organic Cubism whose works constitute a repertoire of forms in which fleshy physicality jostles with geometry. Abstract rigor is challenged by movement, by the sculptor’s vital, artistic energy as he explores his privileged motif: the female body.

Halfway between figuration and abstraction, Pollès expresses the sensuality, the harmony, the power and the softness of bodies. Dynamic or dense, curvaceous or slender, his sculptures bespeak the supple movement of the hand and the plenitude of the flesh in forms that are constantly reinvented. And while a sculpture by Pollès is immediately identifiable – no need to read the signature: his style is enough to identify him – each sculpture has its own identity, suggested by an evocative title. Yterbine, Theano and Centauresque explore a personal mythology with its idols, its goddesses and its icons. Each new piece reflects a moment in the artist’s permanent quest or new forms, lines and shapes. Pollès never repeats himself.

Cast in bronze, they are ready to face eternity. Bedecked in surprising colors, they proudly proclaim their originality: their bluish, red, silver, or black patinas are the finery that highlights their perfect forms: a luminous robe for mysterious beauties summoned by the alchemist’s secret mixtures.

No artist could be more hands-on. From the original form shaped in clay to the finishing patina, Pollès masters and executes each different phase of the creative process. He casts each sculpture in his studio at Pietrasanta, Tuscany. For this Pygmalion, no one else can be allowed to fashion his life-infused forms. (Sylvie BLIN)

Maurice RHEIMS of the Academie française

Pollès’s power of giving life to the bronze by infusing it with a carnal quality enables him to combine the breath of sensuality with the gloving work of the metal-smith. […] In my mind this moulder of metal has taken his place among the illustrious initiates; a curious man, who handles the immensely heavy bronze with the elegant ease of one plucking down from a swan’s breast, shaping, sculpting and burnishing it into a blend of substances and fantasles.

Pollès sets himself the same challenge as a Renaissance artist, as all his sculpting work shows: he is classical, even if he at the same time works as a contemporary of his postmodern era. The son of Michelangelo and Boccioni. The Renaissance artist he is sculpts the same matter, using identical techniques, and similar forging tricks handed down from Vulcan. The same mystery of the forge, the same magic of the fire, the same transfiguration of raw ores into forms and volumes imagined in his steel soul.

You have to have seen him, a golden-curled Vulcan […], in the workshop reverberating with the roar of futuristic machinery, from the casting – an event as moving as a mountain dawn – to the interminable stages of the polishing. […]But what could be less ‘mechanical’ than the work of our Tuscan Doctor Faust? What could ever be more fleshly, vital, succulent, or more inspired by the wild sap of life?

One day, walking along the sidewalk, I found myself halted, aggressed and challenged by a bronze figure in a window. […] The sense of aggression could have just faded away, but instead it dragged on into a persistent, insidious feeling of uneasiness. Unconsciously magnetized, magnetized by my unconscious, I went back the next day. That was how, someone going to a psychoanalyst for the first time.

What is he trying to express? He does not invent Woman, he reveals her through the imposition of his own vision, creating curves or angles according to the whim or the violence of his desire. He harboured a need to create, and to create Woman. He envisioned her through his heart and body. He fashioned her now as feminine, now as female, intoxicated by her curves.