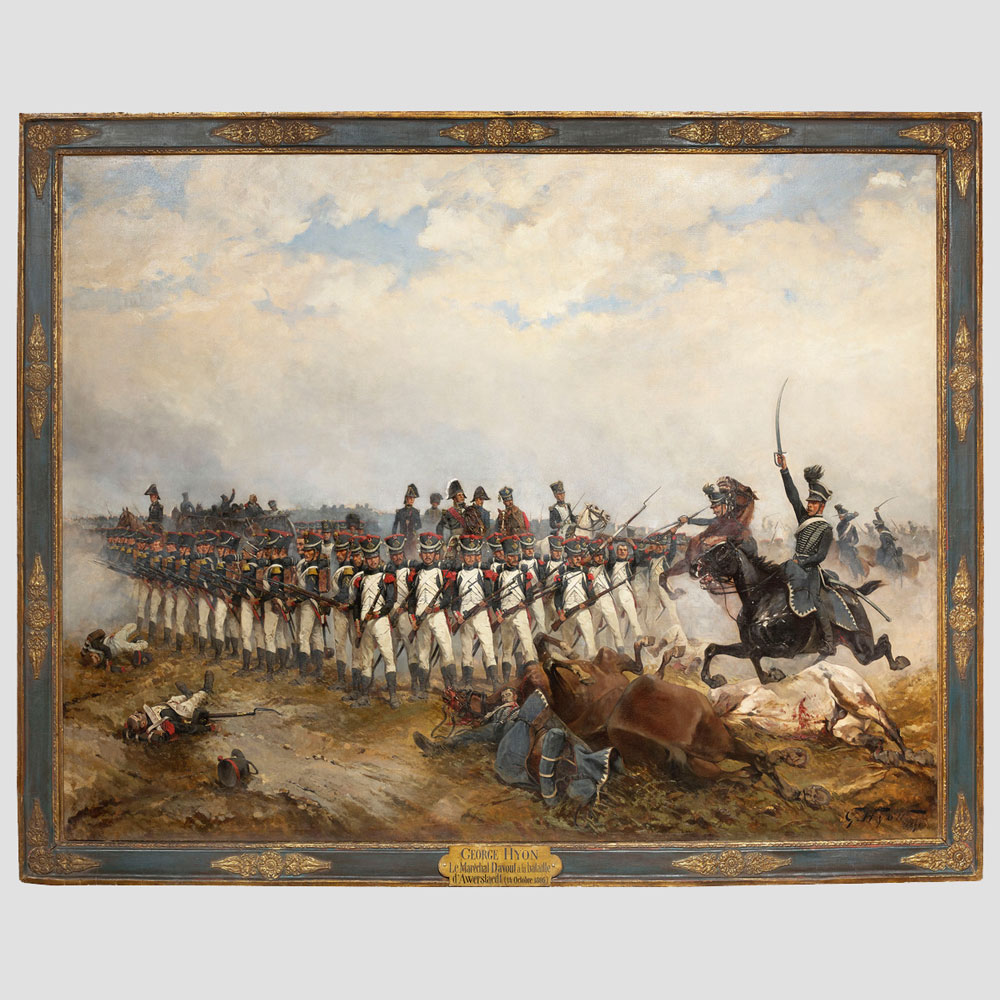 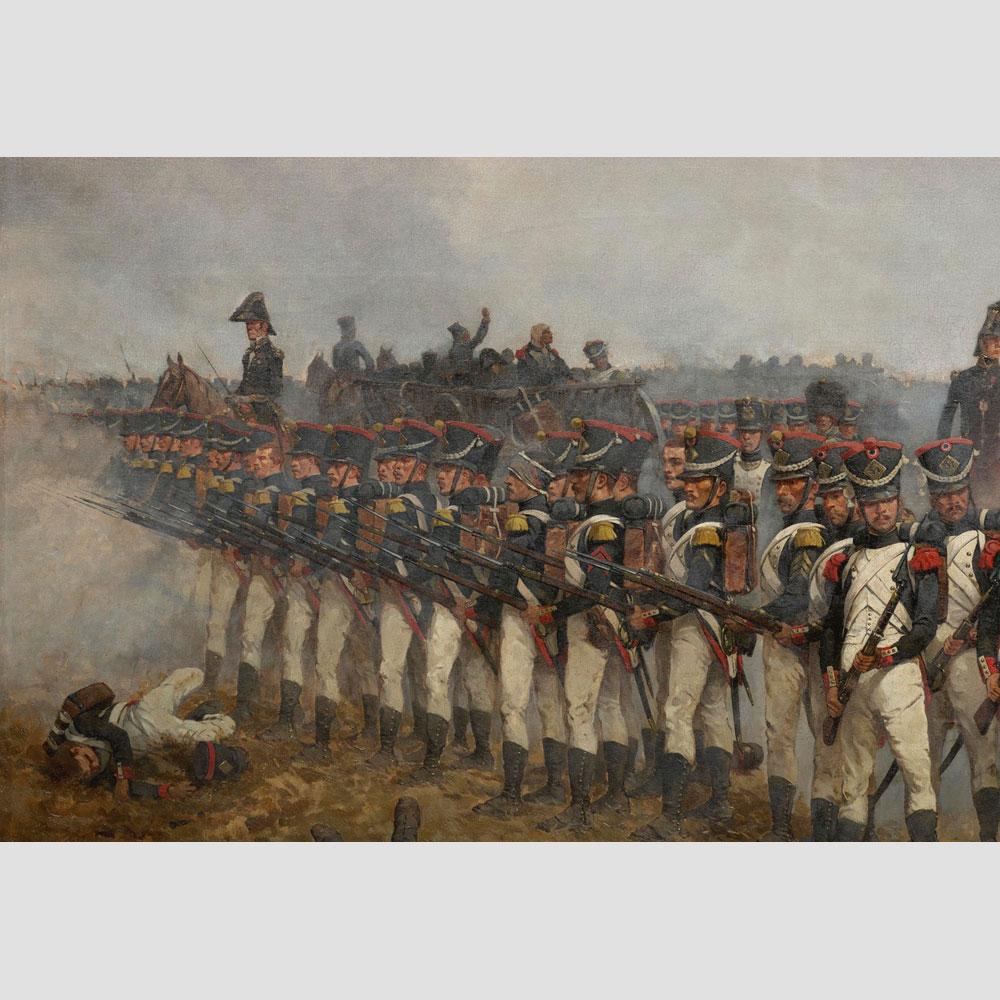 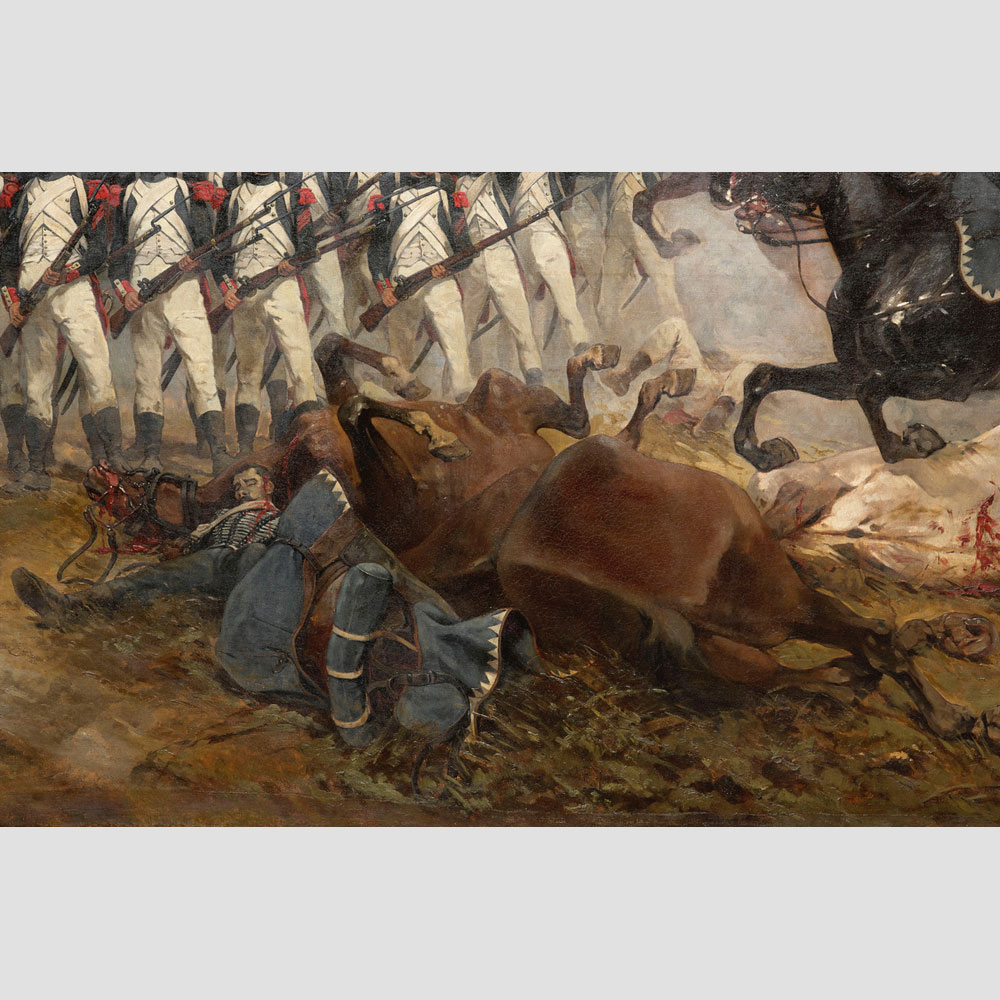 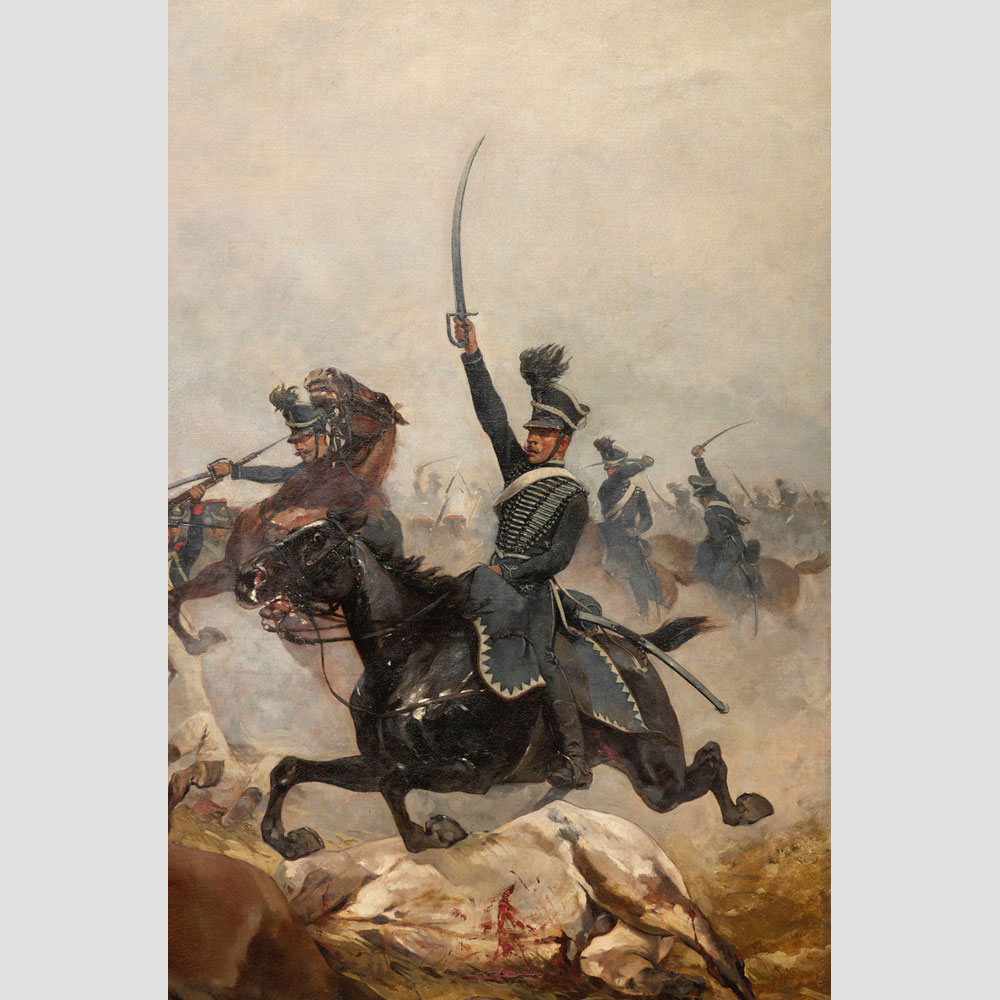 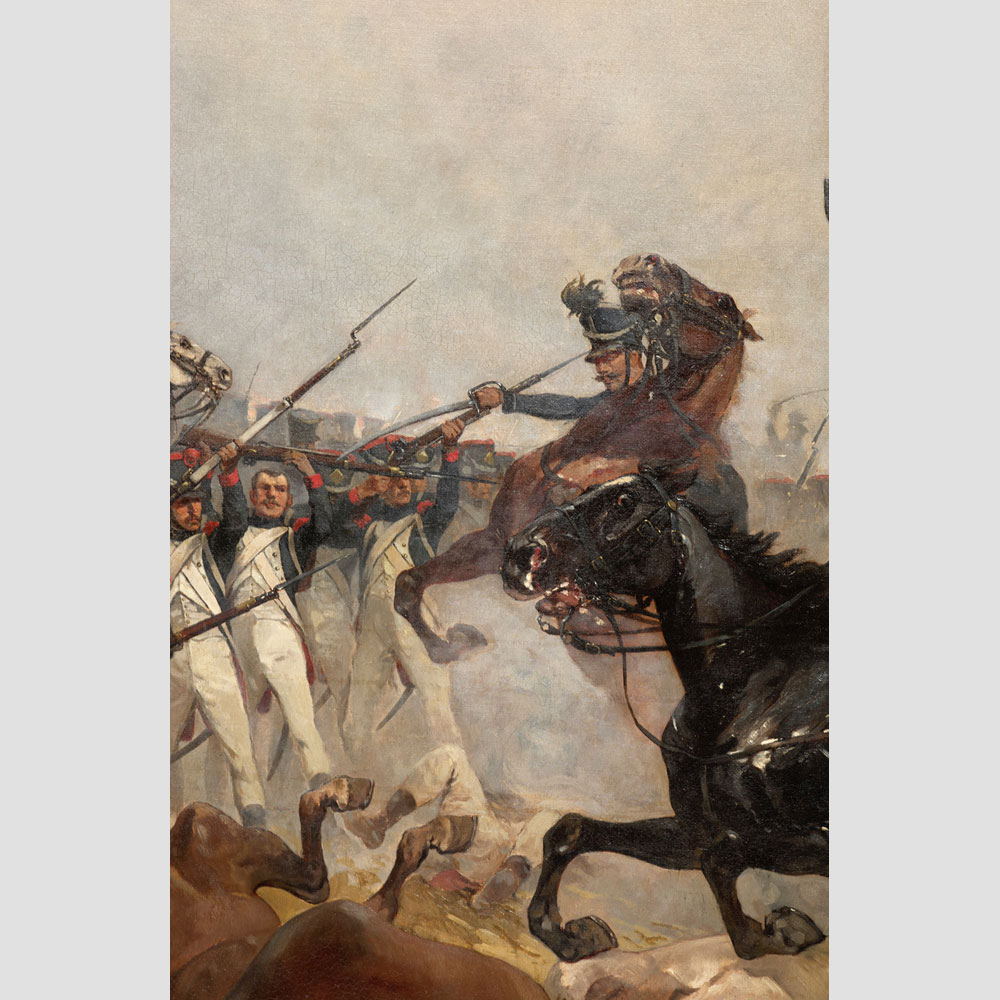 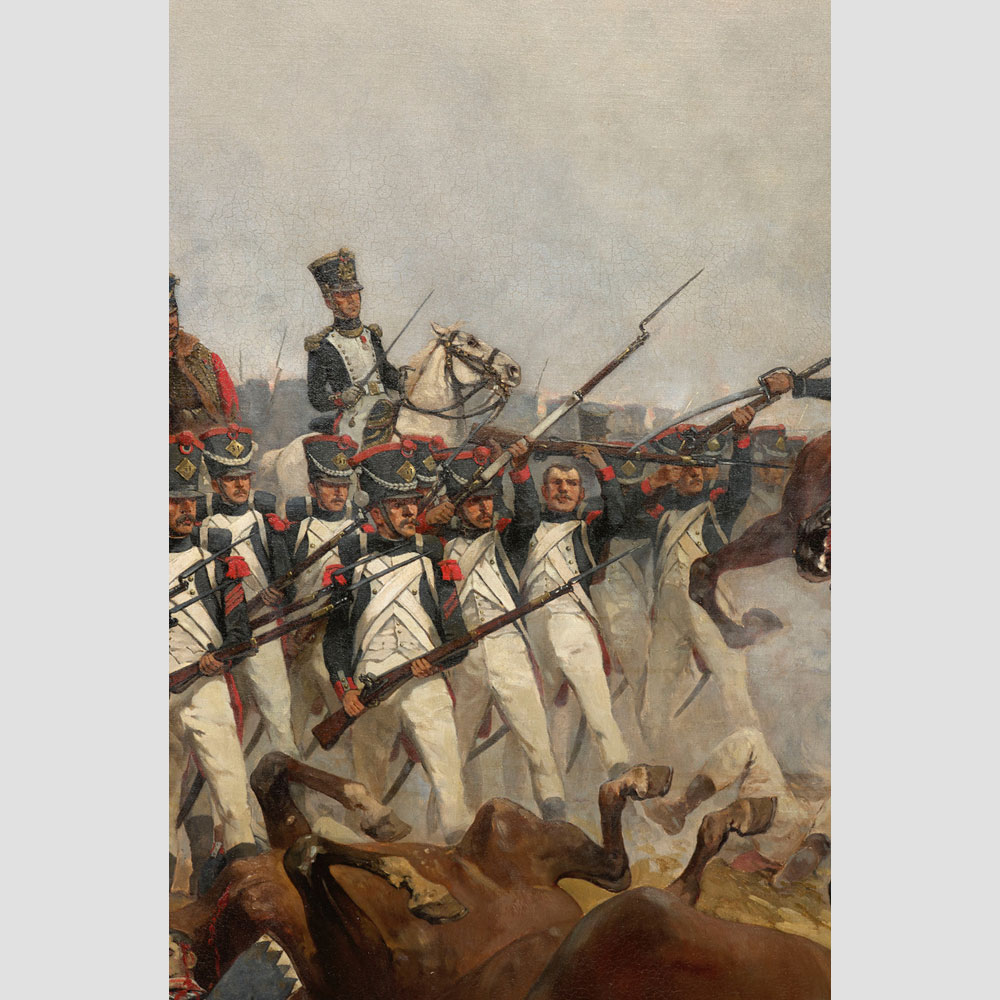 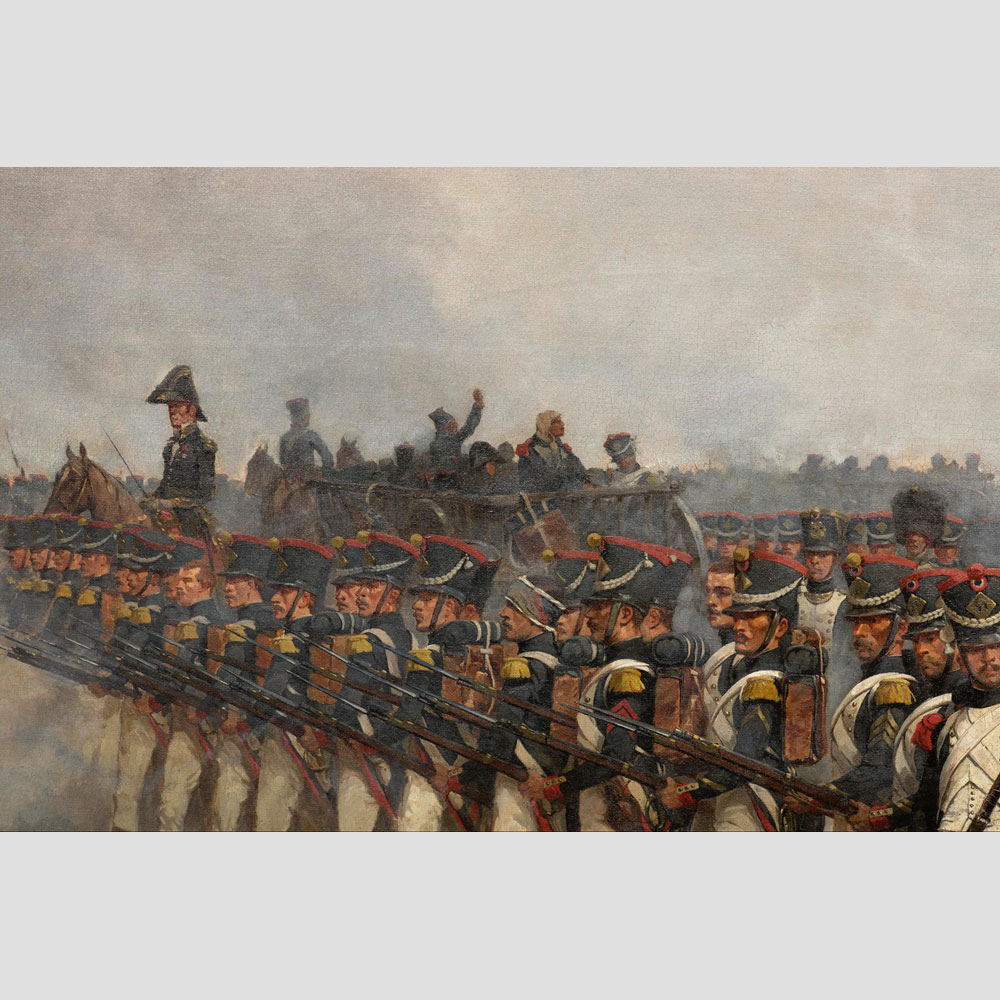 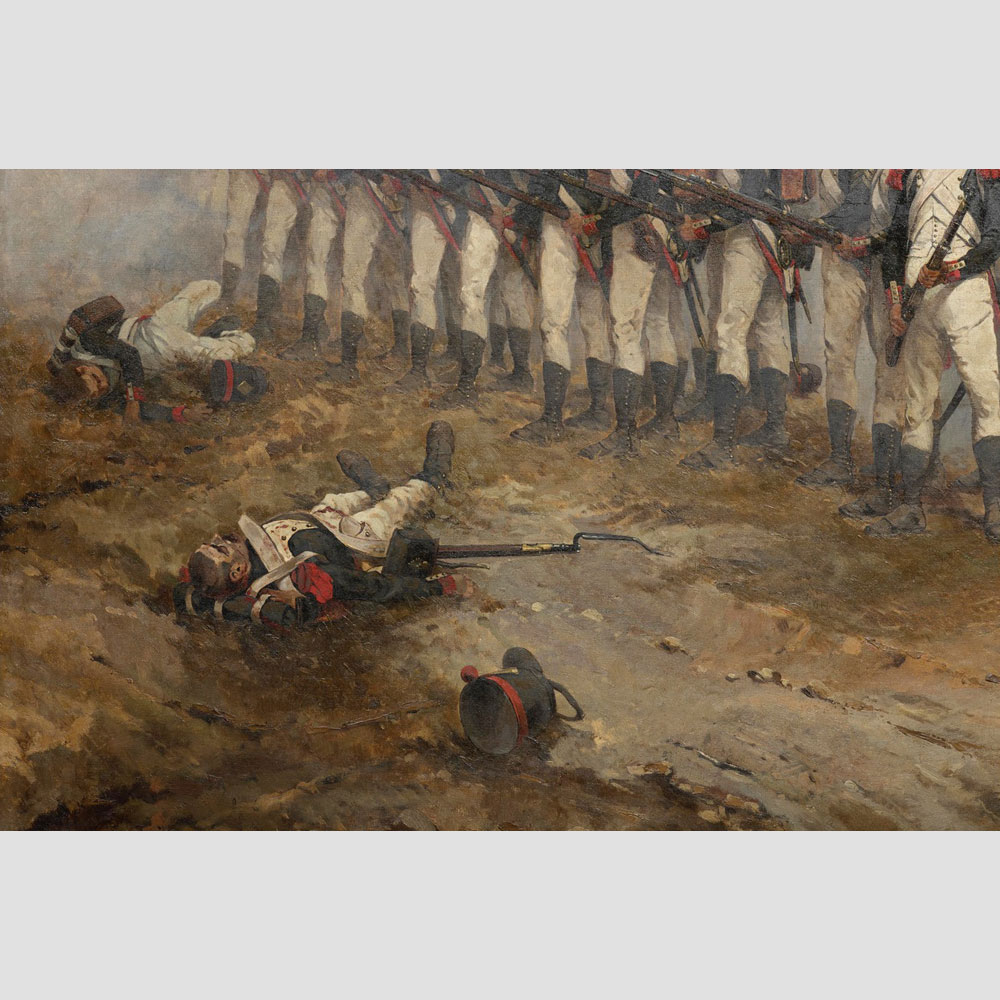 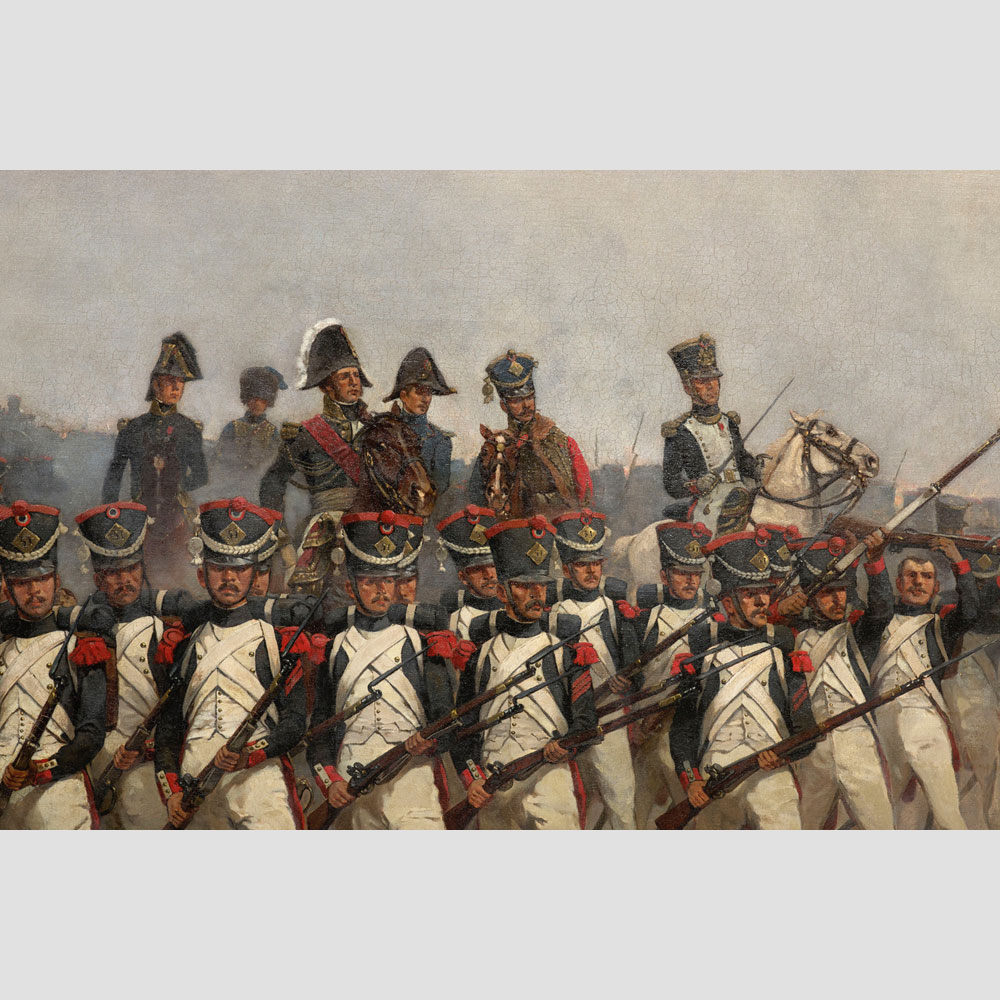 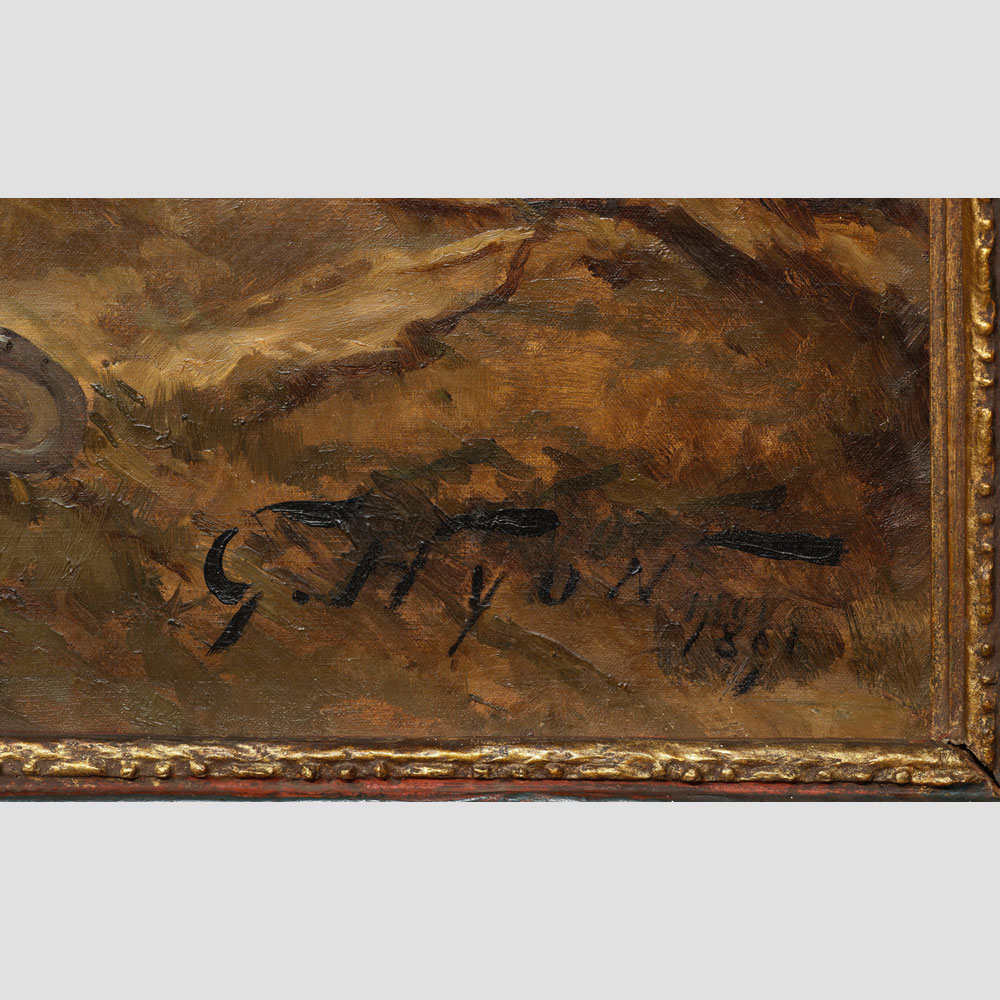 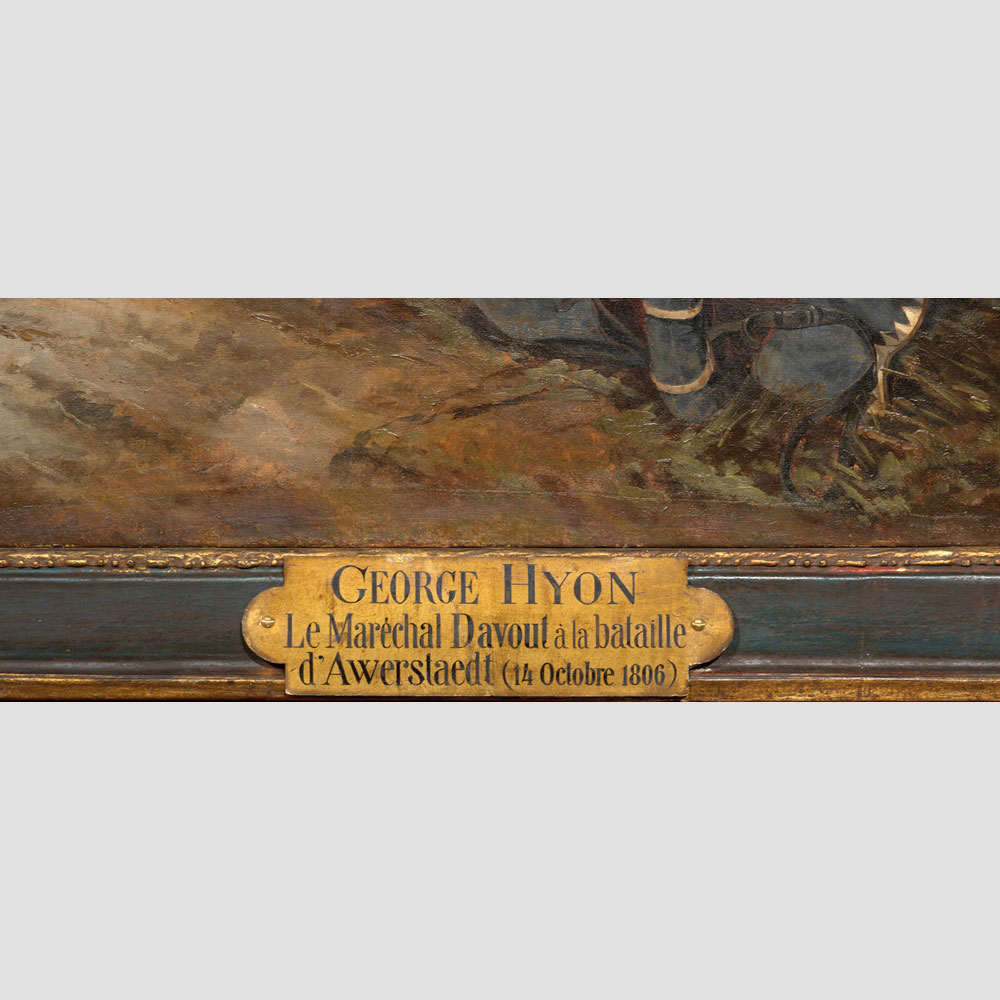 MUSEUM :
– Le Puy-en-Velay, “The flag of the 2nd Zouave decorated in Magenta by General de Mac-Mahon”.

Formed in multiple squares, the French infantry resisted the assaults of the Prussian cavalry which broke on these impassable walls bristling with thousands of rifle bayonets in the barrels. The courage of the French soldiers will repel until the end of the fighting the furious charges trying to dislocate this defensive device as ingenious as it is effective. Marshal Davout will be made Duke of Auerstaedt by the Emperor on March 28, 1808 and then elevated to the dignity of Prince of Eckmül on August 15, 1809. On October 20, 1806 he will have the privilege of entering Berlin first with his army corps. This period corresponds to the apogee of the Empire.

– THE MORAND DIVISION JOINS THE FIGHT

The situation becomes perilous for Davout’s III Corps when Charles Antoine Morand’s division enters the fray from the French left, after having approached at a run. His eruption, around 11 am, broke the momentum of the enemy infantry. Wartensleben is pushed back. The Prussian cavalry of Prince William of Orange, 10,000 strong, then tried to charge the French columns, as that of Blücher had done a little earlier and without more success. The French regiments immediately formed into squares by battalions and pushed them back. Morand immediately went back on the offensive. Meanwhile, in the center of the system, the struggle for control of the village of Hassehausen, considered by the two generals-in-chief as the key to the battle, continues unabated. In this relentless defense, the French regiment which occupies the first line loses half of its effectives. However the Prussian attacks are made little by little less sharp, as the fire of the French skirmishers clears up the lines of the attackers. As at Jena almost at the same time, Prussian battalions had to be forced back into battle by their officers. Brunswick, to revive their courage, then placed himself in the first rank of a battalion of grenadiers and marched with them towards the village when a rifle shot mortally wounded him. General Schmettau killed in his turn, Marshal Möllendorf wounded, half of the high command of the Prussian army is now out of action. In addition, Friant’s division, to the north, was driving back its vis-à-vis, putting Schmettau’s division in danger of being overwhelmed. To avoid it, it puts an end to its attacks on Hassenhausen and picks up. Soon, the entire Prussian front bends and retreats nearly 1,500 meters in order to reorganize.

The new line is established south-west of Hassenhausen. The Prussian left is at Poppel, the center at Tauchwitz, the right in front of Rehausen. From now on, the King of Prussia in person commands his army. He hesitates for a moment between going back on the attack or retreating.

If the three divisions that have fought so far are already well underway, two more are about to join them. The King can throw the whole thing at the French or use the latest arrivals to cover the retreat of the rest. While he deliberates, Davout, for his part, is busy assembling his own troops. The fight pauses. The French marshal soon put an end to the procrastination of the King of Prussia by going on the offensive himself. On the left, Morand’s division advances on Rehausen; in the center Gudin comes out of Hassenhausen to clear the village of Tauchwitz; on the right, Friant attacks that of Poppel where a thousand Prussians lay down their arms. The Prussian army had to resolve to retreat again, in good order, however, always in the direction of the south-west, therefore of Auerstaedt.

– INTERVENTION OF THE KALCKREUTH DIVISION

Halfway to this village, the army corps of Friedrich Adolf von Kalckreuth is installed around that of the hamlet of Gernstedt, the right side is, the left side west until Lissdorf. This reserve is made up of two large infantry divisions and twenty-five squadrons of cuirassiers and dragoons, to which have just been added, at the end of their retreat, a number of Blücher’s cavalry. The position is good, overhanging a valley at the bottom of which the enemy will have to cross a brook, the Lissbach, before going up towards the Germanic troops. The numerical superiority of the Prussians, once Kalckreuth’s corps united with the retreating divisions, would be of the order of two to one. Faced with units that have been fighting since early morning, the chances of a success likely to erase the failures suffered so far are not slim. Blücher vigorously advocates this solution and proposes to prelude it by a large cavalry charge. He was already organizing it when Frederic-Guillaume III reconsidered his initially favorable decision.

The King of Prussia, indeed, is demoralized by the loss of the general-in-chief of his army, the debacle of his infantry and the fiasco.